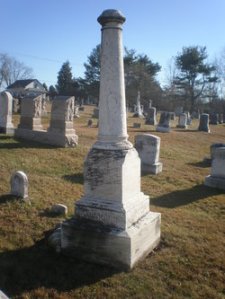 Last week, I put a lot of pressure on myself to find out what happened to Henry Moyer and Henry Sassaman who were indicted for killing Monroe Gresh.  If you missed last week’s article, you can find it here.

Moyer and Sassman were originally brought before the court in March, 1878. The grand jury indicted them for murder, manslaughter, assault and battery with intent to kill, and other minor charges. The trial was then continued to the June session of the court.

In June, the Herald ran a long article about trial the trial in June. By then, the prosecutors had dropped the murder charge.  On the second day of the trial, they dropped the manslaughter charge against both men, too.  Moyer plead guilty and Sassaman not guilty.  Both men then testified.

Moyer admitted to hitting Monroe Gresh with the clock-weight and described Gresh as “pugnacious.” Sassaman gave the same testimony, and both men brought witnesses that gave them excellent characters. 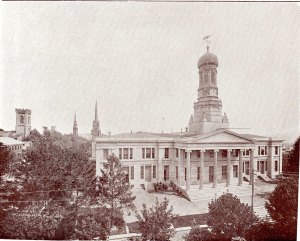 The courthouse as it appeared in 1878.

Today, in going through the folders and identifying their contents, I found an interesting letter written to Joseph Fornance II.   The writer, Henry S. Dotterer, included a small news item with his letter. 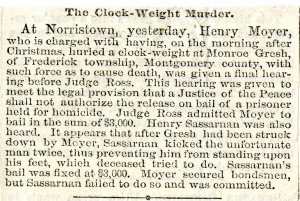 Dotterer goes on to say that Henry Sassaman was his mother’s half-brother, and he wished that Fornance was in Norristown (he was in St. Louis) to provide representation for his half-uncle, who he says was not a “bad man.”

The brief news item piqued my curiosity and I managed to find two more articles on the murder in the Herald and Free Press, which tell a little more about the incident.  Apparently, four young men were gathered at Pennypacker’s Saddle Shop in New Hanover Square.  Jonathan Y. Hauck got into an argument with Henry Sassaman.  Hauck said, “He talked as if he could lick me and I let him know he could not.”  Pennypacker then ordered the men out of his store, and they went out to fight.  Moyer and Gresh followed a few minutes later.  When Gresh tried to re-enter the shop, Moyer stopped him and an argument ensued (one witness said that the men had had a quarrel three or four years earlier).  Then Moyer, according to witnesses, picked up the clock weight and threw it at Gresh.  One witness claimed Sassaman kicked Gresh twice with the heel of his boot.  A physician examined him and did not believe the wound fatal, but Gresh died ten days later.

When I told volunteer and board member Ed Ziegler about the case, he reminded me of the collection of county indictments we have. It took some searching, be we found a file containing the original indictment of Moyer and Sassaman. 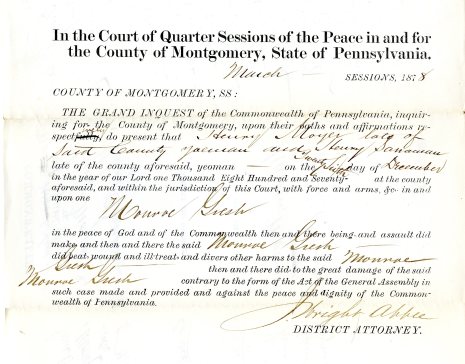 What happened to Moyer and Sassaman?  I hope to find out for next week’s blog.

In the nineteenth century, it was common for political groups to organize marching clubs.  Men would parade in military style uniforms with capes and helmets and carry flaming torches.  In Montgomery County, probably no such group was as large and well known as the Republican Invincibles.  Founded in 1880, the club was primarily interested in presidential and gubernatorial elections.  In between, it was mainly a social club of the kind of which nineteenth-century Americans couldn’t get enough.  It’s annual dinner was required the largest hall in Norristown.

We have two remnants of the Republican Invincibles in our collection.  This is a ribbon that would have been worn by a member at an event like the annual dinner. 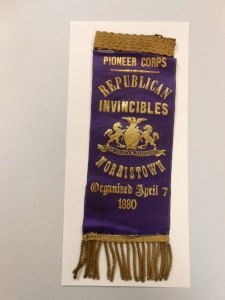 The ribbon below is from the first year of the Invincibles, 1880.  It has photographs of the Republican candidates, James A. Garfield and Chester A. Arthur. 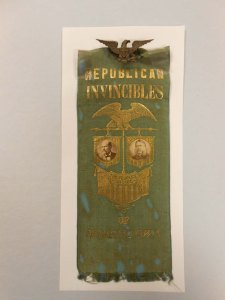 Until the election of 1880, Montgomery County had been solidly Democratic.  Fans of Montgomery County history will know that the Democratic candidate in 1880 was our own Winfield Scott Hancock.  Despite a highly respected career in the Civil War and a very close popular vote, Hancock lost his home county by one vote.  Perhaps the Republican Invincibles played a role.