For those of you who know Norristown, this item should look familiar.  It’s a bee skep, and it’s featured in the municipal seal. 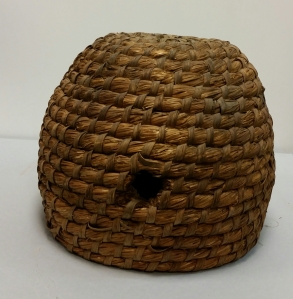 Bee skep in the collection of HSMC

Beekeeping shows up in many cultures, from Egyptians using wax and honey in mummification processes to Mayan apiaries in the 16th century.  Even before domesticating bees, people around the globe collected honey for eons, from Asia to Africa, India to Australia. 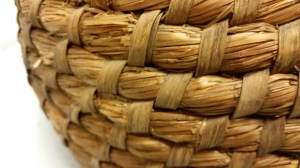 A bee skep is essentially an upturned basket used to house bees and eventually collect honey and wax.  This style, made of straw, was used from the Medieval era through the mid-19th century, when new techniques were developed.  They can also be made from wicker coated with mud or manure.  The skep has one hole for the bees to pass through and it sits on a mat or platform to keep the bottom closed off until necessary.  The bees produce a comb inside the skep just like they would naturally in a tree.

The bees line the interior with propolis, a resin mixture used to seal the hive and prevent fungal and bacterial growth.  If you look closely at this image, you can see the slightly darker material, especially between the layers. 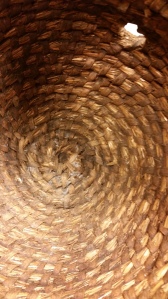 With a skep, a beekeeper had to many times destroy the colony of bees to extract the comb, by either placing the skep over smoking coals or by pressing the skep, bees and all.  Some alternatives were used, like forcing the bees to move from one skep to another, but once wooden hives with removable frames were introduced, the bee skep slowly faded from use.

Bees provide not only honey, which has antiseptic and preservative properties along with being a sweet treat, but they also produce beeswax.  In early colonial America, bees were imported in the mid-17th century.  By the end of the century, most every family would have had at least one skep.  These colonists used wax not only for making candles, but also to waterproof leather and bind wounds, and honey to cure their meat. 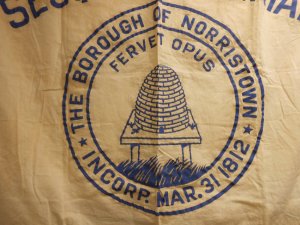 So the question remains, why does Norristown use the bee skep as its municipal seal?  It’s an indication of industry…a busy bee!  It’s paired with the Latin phrase, “Fervet Opus” meaning “Boiling with work.”  Norristown is the county seat, and in its early days was full of canals, railroads, and mills as a manufacturing center in the county, as busy as the inner workings of a bee skep. Through the years it became a hub for retail with department stores and other draws, with trolleys and passenger rail bringing people to the downtown businesses.

Wooden nickel used for advertising at the 1962 Norristown Sesquicentennial

Norristown isn’t the only one to use this symbolism.  The Mormons also uses the bee skep, and through them it has become one of the state symbols of Utah.  The Masons, too, use the image, to signify industry and cooperation. 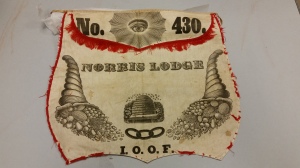