Yesterday, since the Historical Society was closed, I got to spread out in the reading room and process some long unopened boxes.  A box labeled A. H. Gehman revealed a chaotic collection of papers belonging to Abner H. Gehman and his son, Harry M. Gehman.

Abner H. Gehman was born in 1854 in Franconia Towship.  As as adult, he moved to Norristown.  Going through the box, I found many things familiar from writing this blog.  Mr. Gehman was member of the Republican Invincibles.

He also briefly worked as a clerk at Adam Scheidt Brewing Company.

Gehman was an active Republican and served as clerk of the county courts for four years and as a deputy clerk for forty.

For most of his life, Gehman worked in real estate and insurance, but for five years, 1895-1900, he owned a haberdashery shop on West Main Street in Norristown.  That business is connected to this curious document I found.

Was this an attempt to get husbands and fathers home for dinner on Thursdays or was there something else going on?  I looked through the Times-Herald for the years Gehman had the store, but I didn’t see a notice about the new hours.

When Abner Gehman died in 1939, just after his 85th birthday, his obituary appeared on the front page of the Times-Herald.

One of the greatest treasures of the Historical Society of Montgomery County is our extensive microfilm collection.  Tax records, deed indexes, newspapers, and much more can be found on our over 1000 reels of microfilm.

We now have a brand new ScanPro 2000 to view them on (thanks to an anonymous donor).  If you’ve used our old machines (which are still available), you’ll be amazed by our new one.

The ScanPro converts the microfilm into a digital image, which can be adjusted on the screen before printing or saving the image.

The sharp image and easy-to-use interface

The images are much easier to read, and negative films can viewed as positives.  There’s a tool for spot editing, and users can copy and paste text.  You can even search the screen for a word!

Come in soon and try our newest tool!

These strapping men were employees of the Wilcomb Machine Company, a firm that made industrial sewing machines in Norristown.

The company was managed by J. Frank Wilcomb who had several patents on sewing machines, such as the two pictured here.

And here’s a neat advertisement from a 1910 trade paper:

The factory stood at Washington and Franklin Drives in Norristown.  I can’t tell when the factory closed down, but by 1920, Frank Wilcomb had moved on and founded another company in Rhode Island. 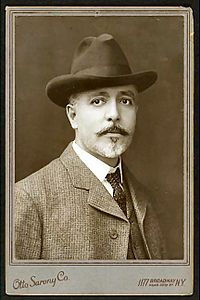 Do you recognize the man above?  No?  Me, neither.  But in his day he was a very popular stage actor who toured both the US and Europe.  His name was Otis Skinner, and at the height of his fame he maintained a summer home here in Montgomery County.

Born in Cambridge, Massachusetts in 1858, Skinner made his stage debut at 19 in 1877 when he played Uncle Tom in a stage production of Harriet Beecher Stowe’s novel.  He went on to play many Shakespearean roles.  In 1911, he originated the role of Hajj in the play Kismet, and he later recreated the role in both the 1920 and 1930 film versions.  These are his only two film credits.

Now, the Montgomery County connection.  According to Edward Hocker’s article in the Norristown Times-Herald of October 14, 1945, Skinner and his family first leased a house on Spring Mill Road in Lower Merion in 1905.  It was from there that he wrote this letter, which is part of our collection here at the Historical Society of Montgomery County.

The letter was donated by Edward Hocker in 1933, how he came to have the letter is unknown.

In 1909, Skinner purchased the Wheeler estate which was on Gulph Road (the house was later destroyed by fire).  Although Skinner spent only a few months a year in Lower Merion, his daughter Cornelia Otis Skinner (who became a famous actress), attended the Baldwin School.