When Dr. Mary Henderson Stinson died in 1889, she left her entire estate for the establishment of a home for the elderly women of Norristown.  Her will specifically states that the home was for respectable spinsters and widows over the age of 56 who had lived in Montgomery County at least ten years.  The home was incorporated in 1894.

The Aged Women’s Home stood at the corner of Markley and Brown Streets.  It had many denizens over the years, and a listing of many of the women who lived there are in the Historical Society’s collection.

We also have a list of the rules for the women who moved into the home. 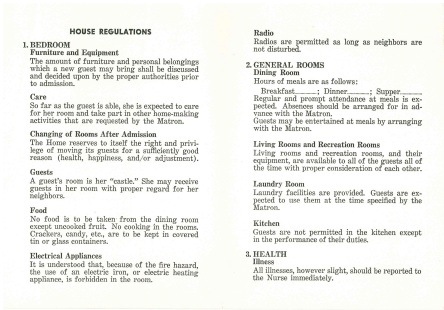 The home had room for twelve women at a time.  A brochure lauds the home’s wide hallways, elevator, and electric lights.  An onsite farm provided much of the food.

To move in, an inmate had to pay $250 and turn over all of her possessions.  In return her meals and medical care would be provided by the home.

In 1935 some of the land was sold to the Norristown School District for building A. D. Eisenhower High School. 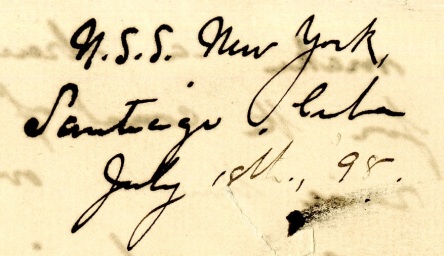 With the recent thaw in relations between the United States and Cuba, I was reminded of a letter we have in our collection.  The letter was written by a surgeon in the US Navy serving on the U.S.S. New York during the Battle of Santiago de Cuba (1898).

Dr. Raymond Spear’s father, John C. Spear, was also a naval surgeon.  Dr. John C. Spear was a veteran of the Civil War, and he settled in Norristown with his family when he retired in 1888. Raymond Spear (who was born in Nice, France) graduated from Norristown High School in 1890 and went on to study at the University of Pennsylvania and Jefferson Medical College.

In his letter to a friend in Norristown, written about two weeks later on July 18th, Spear covers the battle with the phrase, “Our work around Santiago is justly well finished.”  He goes on to speculate on where they might be sent next.

“If we have our own pick we would make a straight line for the coast of Spain and raise thunder over there.”

Spear continued to serve in the Navy until his retirement in 1930.  He settled in California where he died in 1937.

Well, an inverted acorn with an oak leaf on either side is the official seal of the Historical Society of Montgomery County.

This seal replaced a much plainer one which simply had the name of the society around the outer edges (as in the one above) and in the center was written “Incorporated January 8, 1884.”  We’re not sure when the acorn seal was adopted.  According to the society’s first minute book, a committee to revise the seal was created in 1898.  For the next couple of years, the minutes record that the committee was making “progress,” but there’s no indication of what they planning.  Eventually, the committee ceases to report at all.

So, we don’t know for sure when the acorn became our seal, but we probably know why (kind of).  The story goes back to when before our county was a county.  Norristown is named after Isaac Norris, an Englishman who came to Philadelphia in 1693, where he served as mayor and speaker of the assembly.  He and a partner, Colonel William Trent, purchased the land that is now Norristown from William Penn’s son for 850 pounds.  Trent sold out to Norris a few years later (he would go on to found Trenton, but that’s another story), and the land stayed in the hands of the Norris family for several generations.  In 1771 John Bull of Limerick bought the land, and five years later he sold it to the University of Pennsylvania.

The university still owned the land in 1784 when Montgomery County came into being.  In 1785, the university deeded a portion of the land to several citizens of the “Town of Norris.”  The deed book says, “in trust and for the county of Montgomery for the purpose of erecting a court house and jail suitable to accommodate the public service.”  The deed book, and a 1924 article in the Times Herald report that the land cost 5 shillings. The newspaper article also says that a yearly rent of one acorn was to be paid the university.  However, that does not appear in the deed book!

So where did the story of the acorn come from?  It turns out that individuals who purchased land from the University of Pennsylvania were required to pay the yearly acorn rent (if demanded).

So the legend of the acorn rent was born and the Historical Society got a seal.

Now, why did the university want acorns?  Was it planting an oak grove, feeding squirrels, or was the acorn meant to be a symbol? I’m afraid we don’t know.

To the Historical Society, the acorn in our seal represents transformation, both of our organization and the constant transformation of Montgomery County.

This week, the nation’s media seemed to focus on two places: Iowa and Norristown.  Well, we don’t have anything in our collection from Iowa, so I thought it might be a good week to take a look at the Montgomery County Courthouse.

The original courthouse was built in 1787, and probably looked less cartoonish in real life.  The courthouse and its neighboring office building stood where Public Square is now. 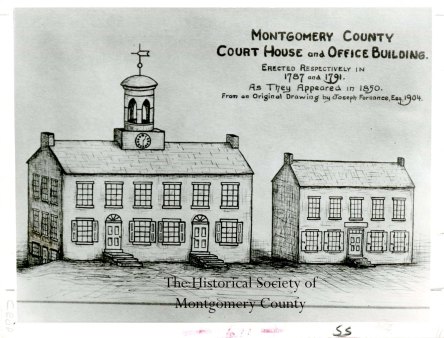 By 1849, the Montgomery County had outgrown both buildings. The current courthouse was designed by Napoleon LeBrun, who was also the architect of the Cathedral Basilica of Sts. Peter and Paul and the Academy of Music in Philadelphia. 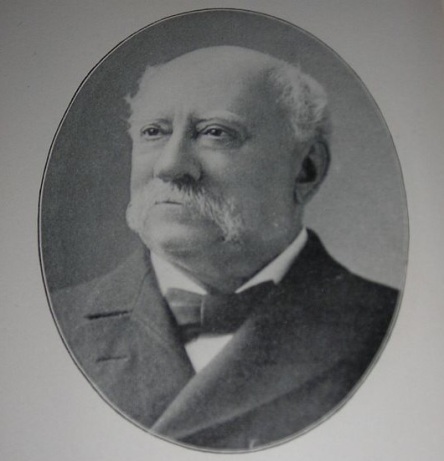 The building opened in 1854, at which time it had a steeple.  The building is made of brick faced with marble from Schweyer & Liess, a marble quarry in King of Prussia.

Over it’s century and a half of history, the courthouse has seen many trials, but I don’t know if any have gotten the attention that the current case has.