There’s a persistent myth that people in the past had better penmanship.  The handwriting of Natalie R. Rogers dispels that myth.  A teacher, and later principal, in the East Norriton School District, she kept the records of the school board for several years.  It’s isn’t completely illegible, but it’s hardly easy to read.  So examining the minute book for the East Norriton School District  (1910-1920) was not easy.

The kind of handwriting that drives archivists crazy.

Luckily, she was not secretary for the whole period, so we can still glean some interesting facts from the minutes.  For example, the district purchased its first school bus in 1917.  It was a “Studebaker Auto Bus” and cost the school district $1550.  Here’s a Studebaker bus from 1912 that’s probably very similar.

Most of the meetings concern taxes, the purchase of books and supplies, and staff.  In 1911, the board debated establishing a high school in the district, but didn’t come to any conclusion. Students from East Norriton attended Norristown High School, with the East Norriton School district paying their tuition.  A note in the minutes from March 4, 1918 reports that the school district will coordinate with Norristown High School so 8th graders will move more easily into high school.  Secondary eduation was not compulsory at the time and students not wishing to go could stay in the East Norriton schools until they were old enough to leave school.

This volume covers the time of the US involvement in World War I, and I was curious to see the impact of the war on the schools. Unsurprisingly, there was a shortage of supplies, and schools had to be closed for a week in January, 1918  and all of February because of a coal shortage.  The war itself, however, is not mentioned.

This book records the final exam grades of the students only for 1910 and 1911.  The graduating classes are still small (only one pupil was examined in 1911).

The back portion of the book contains pre-printed contracts for teachers and other documents necessary for a school board. 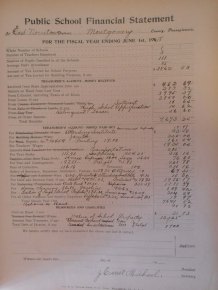 Overall, the minutes show little conflict and very little concern with the specifics of the school curriculum.  There are little details about the hiring or qualifications of teachers.  There is a lot about finances, however, so some things don’t change.