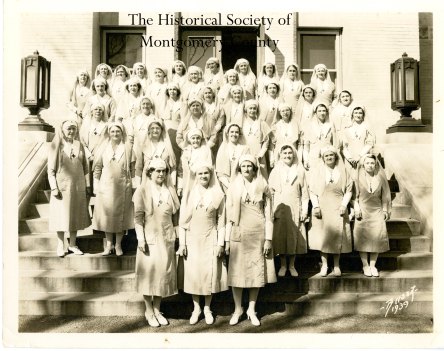 Here is a picture of what I thought at first were a group of nurses. In fact, they’re Gray Ladies, Red Cross volunteers who worked in hospitals all over the county in non-medical rolls.  This group is from Montgomery Hospital.

The Gray Ladies, who were originally known as the Hostess and Hospital Service and Recreation corps, were founded during World War I.  Facing a great expansion of its volunteers, the Red Cross created color-coded uniforms, and the “Gray Ladies” quickly became a source of comfort to wounded soldiers.  After the war, the program expanded to civilian hospitals, like Montgomery.

The Gray Ladies first came to Montgomery Hospital in 1939, so this photograph is of the first group.  At that time they were under the direction of Mrs. Warren L. Irish.

They served many roles in the hospital, including the running the reception desk and the patient library.  They also worked in the children’s ward, as reported by the Times-Herald in 1955. 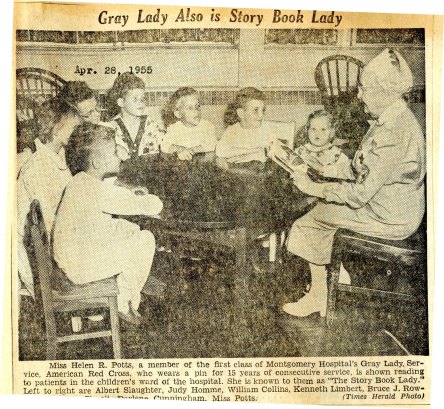 From blood drives to Christmas parties,  the Gray Ladies made the hospital a warm, welcoming place.  In 1947, the Red Cross changed the name of the group to the Gray Lady Service.

The Red Cross continues to provide support services to hospitals across the country, but the Gray Ladies themselves have gone.  In the 1960’s, the Red Cross unified it’s various volunteer corps, and a single blue uniform was issued.