If you know Montgomery County, then you probably know the Times-Herald or the Pottstown Mercury, but do you know The Olive Branch?

The Olive Branch was a weekly newspaper published in Norristown and Doylestown from 1842 until 1859.  The Historical Society of Montgomery County has three years of The Olive Branch, 1850-1852.  The paper did not affiliate with a political party, but supported several contemporaneous political movements, including the very new women’s rights movement.

It can’t be denied that The Olive Branch was a preachy newspaper.  Here is another article on women’s rights that holds women to a  high standard of “innocence and purity” while declaring those who fail to meet this standard “unfit to live in civilized society.”

In the decade leading up to the American Civil War, the paper was also anti-slavery.  Here is a little bit of a letter to the editor attacking the Fugitive Slave Act:

And this one is an attack on the use of tobacco that has a familiar ring to it:

But the real focus of the newspaper was the temperance movement, the crusade that would culminate with complete prohibition on alcohol in the 1920’s.

The paper didn’t only announce and report of meetings of various temperance groups, it also published many temperance poems and even serialized novels that illustrated the dangers of “demon rum.”

The temperance articles in the paper focus on  liquor and drunkenness, not a complete ban on all alcohol.

Our three years of The Olive Branch have been digitized by Villanova University’s Falvey Library, and you can see them online as part of their digital library.  Take a look at a few issues, and don’t skip the advertisements.

I bet that title got your attention.

If you’ve ever been in our research room at the Historical Society’s headquarters, you’ve seen that we have a lot of books.  However, the books on our open shelves are only part of our collection.  We have school books, rare religious texts, histories of local schools and businesses, but my favorite part of the collection are the novels written by locals.

Way back when we started this blog, I told you about Charles Heber Clark, a best-selling author and rival of Mark Twain, who lived in Conshohocken.  Today I have the books of Howard R. Watt, a Norristown native who took up writing (or at least publishing his writing) in his retirement.

Watt was born and raised in Norristown.  He attended Norristown High School and William Penn Charter School before entering Princeton.  After graduating in 1917, he returned to Norristown and eventually took over the family business, Watt Woolen Mill.

He retired in 1949, and it seems, took up writing as a hobby.  His first book, The King’s Pardon, was published in Great Britain in 1958.  It’s the story of the young Marquis de Tourville and the poor but beautiful Andrienne de Savoie.  The Evening Chronicle in Manchester said it was “altogether a clever and delightfully told story.” 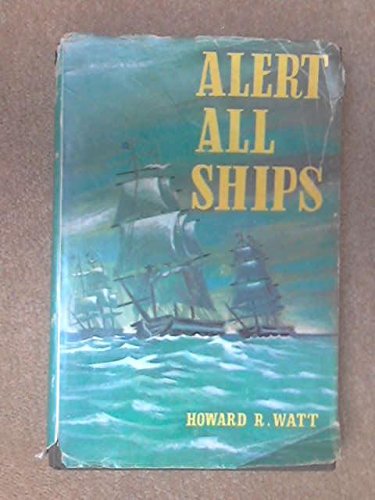 The front cover of Alert All Ships from Amazon.com

He followed up his first book with Alert All Ships, also published in Britain.  It continues the story of the Marquis’ son, René, a physician in revolutionary Philadelphia.  The same year, Alert All Ships came out (1962), his first book was released as a paperback in the US.  The title was changed from The King’s Pardon to the much racier Pool of Seduction.

The books did not become bestsellers (though they’re not all that bad).  Howard R. Watt died in 1967 after breaking his hip in a fall at his 50th college reunion.  His obituary doesn’t mention his books at all, but I’m sure he was proud of them.  The three books in our collection were all donated by Watt himself, and he inscribed the first one to the Historical Society.

Many of the people who come into the research library stop to admire the chandelier that hangs over the tables.  This chandelier came from the Hooven house which stood at 28 East Airy Street in Norristown.  The house was torn down in the 1930’s for the Norristown Post Office, and the family donated the chandelier to the historical society.

Several members of the Hooven family grew to prominence in Norristown.  James Ekron Hooven and his son Alexander Henry Hooven ran the Norristown Iron Works, which was located on the Schuylkill River.  It consisted of a rolling-mill, a blast furnace, and pipe-mill.

Alexander’s daughter, Emeline Henry Hooven did not go into the family business.  After schooling at Miss Caroline Whipple’s school, Norristown High School, and St. Mary’s Hall in Burlington, N.J., she began working in the law office of John Faber Miller.  She later became the second woman in Montgomery to pass the Bar.

Hooven practiced law in her own office on DeKalb Street.  I’d love to tell you more about her practice or an interesting case she was involved in.  Unfortunately, her long obituary in the Norristown Times-Herald of March 16, 1937, makes little mention of her long career, but focuses more on her ancestors and her membership in various societies (including the Historical Society in Montgomery County).

Emelin Henry Hooven in the Norristown city directory under “Lawyers”

The obituary does mention another accomplishment of Hooven’s however:

“In 1920, she was elected a delegate to the Constitutional Convention, to represent the Ninth District of Pennsylvania, consisting of Bucks and Montgomery Counties.  This was an unique honor — the first time a woman hdd been selected to receive this distinction.”

Yesterday, I was looking through our postcard collection for a patron, when I came across five postcards of pigeons.

A couple of cards have writing on the back explaining that the pigeons are racing pigeons, and it turns out, pigeon racing was a popular pastime in Montgomery County.

According to pigeon racing enthusiasts, the hobby has been around for centuries, but it really became popular in the mid-nineteenth century in Belgium.  You’re probably aware of pigeons’ homing abilities, and that comes into play with pigeon racing.  The pigeons are brought to a single starting point and released.  They then fly to their home lofts.  Officials carefully measure the distance between the starting point and home loft i, and the birds are timed to determine the winner.

Montgomery county has a long history with pigeons.  The county was once home to tens of thousands of passenger pigeons, leading to the name “Pigeontown” for what is now Blue Bell.

Several clubs for homing pigeons and racing pigeons existed throughout the county (and a few still do in Norristown, Gilbertsville, and, fittingly, Blue Bell).  In 1892, Charles F. Hoser of East Norriton bought a periodical called The Homing Exchange.  According Hoser’s obituary in the Times-Herald (June 13, 1953), the magazine had a circulation of only 600 when he purchased it.  Hoser changed the name to American Racing Pigeon News, and it became one of the leading international journals on pigeon racing.

The pigeons in the photographs were all bred by Lin Hendricks of Norristown.  According to his obituary (Times-Herald, October 11, 1940), Hendricks first learned pigeon breeding in the army during World War I.  His loft was named “The Danger Loft.”

The races can be anywhere from 100 to 1000 kilometers.  Over such a long distance, it is not uncommon for birds to get injured or killed during the race.  Birds of prey, the weather, and running into cell phone towers or power lines are common threats.  For that reason, animal rights groups have objected to pigeon racing.