Mount Pleasant Baptist Church held it’s first service, with 21 congregants, in Mount Pleasant Grove on May 25, 1834.  The building shown below was opened in January of 1835. 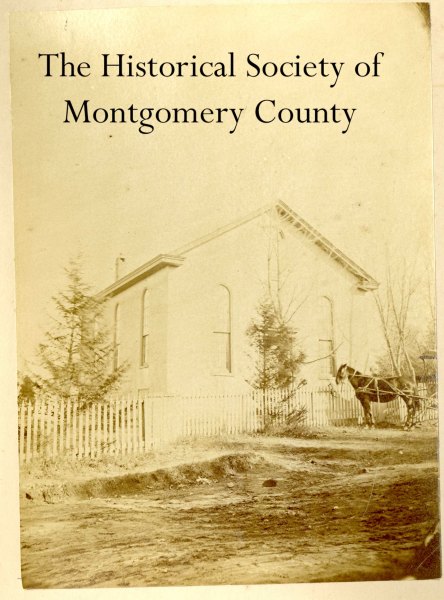 It originally stood in Whitpain on Morris Road between Lewis Lane and Mount Pleasant Avenue.

The congregation founded a mission church and school in 1872 in Ambler, a small village of about a dozen homes at that time.  Both were in the home of G. W. Lowry.  Five years later a small chapel was built, which was the first church built in Ambler.  In 1887, the Ambler church became the home of the congregation’s regular services, and the fancier church seen below was built in 1892.

This building is at the corner of  Forest Avenue and North Spring Garden Street.  Here it is with a group from the North Philadelphia Baptist Association Meeting in 1908. 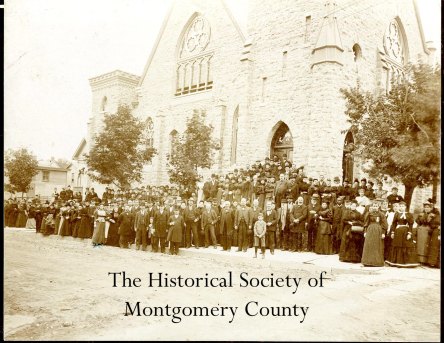 Both these photographs are recent gifts from Mr. and Mrs. Ross Gordon Gerhart, III, of Ambler.

The original church has been demolished.  The second church is still standing in Ambler, but it is now the Ambler Korean Presbyterian Church.  Some of the records of the Mount Pleasant Baptist Church are here in the Society’s archives.

The Freas family in Montgomery County can trace itself back to George Freas, a German immigrant who settled in Whitemarsh township and fought in the American Revolution.  The family stayed in Whitemarsh for several generations.  We have a small collection of Freas family papers, including papers of that original George Freas, donated to the society in 1940 by Alice Propes. 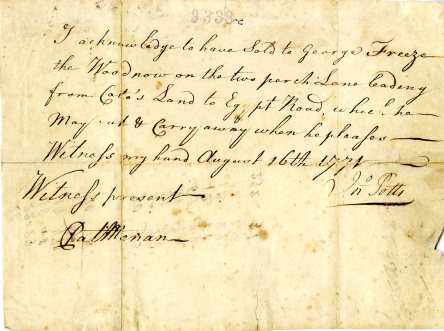 Recently, I came across another collection of Freas related materials donated to the society in 1993.  This collection was accumulated by Katharine Coulston Bilgen Frankenfield (say that 5 times fast) and donated by her step-granddaughter Michele Frankenfield. 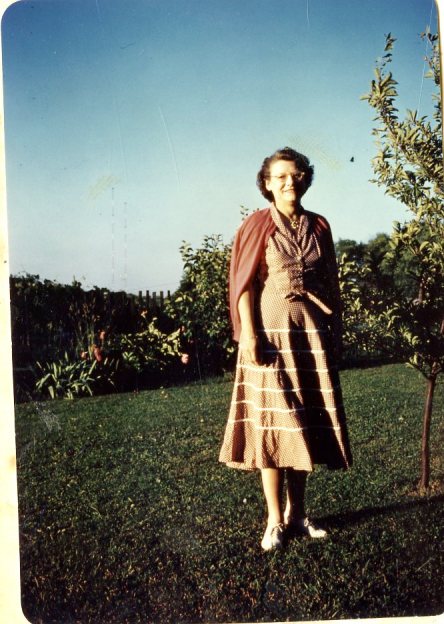 Frankenfield’s papers largely cover several decades of Freas family reunions, which were held on and off in Montgomery County from the late 19th century through the middle of the 20th century. Here’s a photograph from the 1897 reunion: 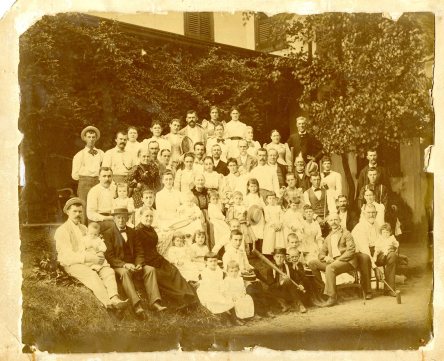 Now, you might have noticed that the Freas doesn’t appear in Mrs. Frankenfield’s long name.  Her mother Ida was a Freas who married Walter Coulston.  Mrs. Frankenfield also kept a very old family album filled with cabinet cards, many of which are identified.  This tintype is identified as Ida: 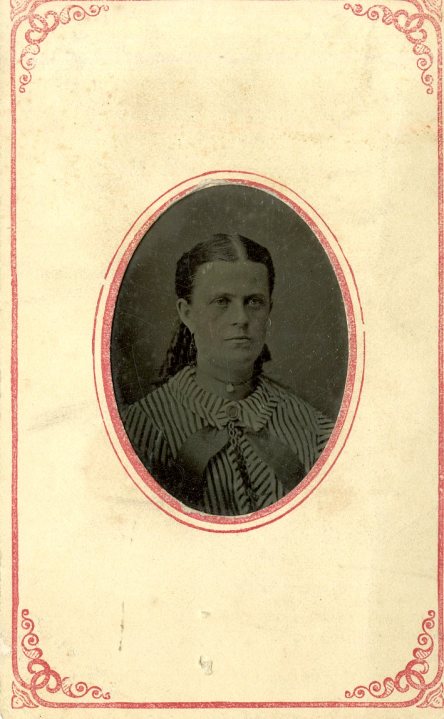 I didn’t see a picture labeled Walter, but according to the reunion binder, Walter’s mother was Amanda.  Unfortunately, I didn’t see her maiden name anywhere in the documents. 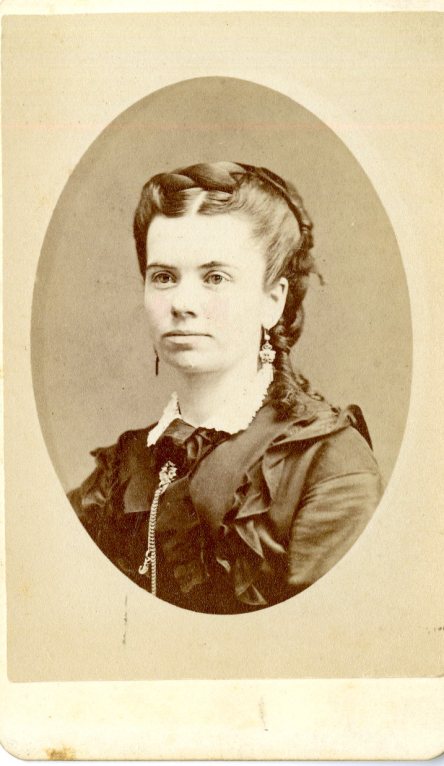 The organizers of the family reunions (they changed over the years) kept up correspondence with the far flung reaches of the family.  Many of the letters to the organizers report marriages, births, and deaths, but one letter had an intriguing story.  Written by Mrs. Walter Hess in 1957 she reports what happened to her daughter Alice’s husband. 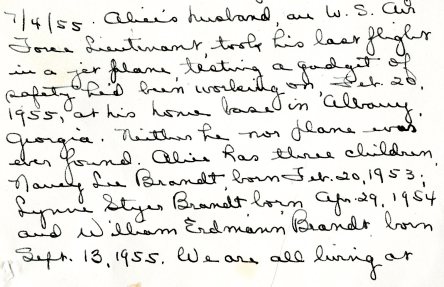 His name, she tells us later in the letter, was Erdmann Ellis Brandt.  I realize he’s neither a Freas nor a Coulston, but it was too interesting not to include.  Alice went on to became a vice-president at the University City Science Center and died in 2013.

Way down on a bottom shelf in our lower stacks, I found a box labeled “Peter Shearer Papers.”  When I find a box like this, I have no idea what I’m going to find inside: deeds, report cards, diaries, even hair.  In this box, I found the papers of the Peter Shearer, and a bunch of other Shearers, but that’s not what this blog is about.  Not this week anyway.

Tucked in among all the Shearer papers, was an unrelated set of papers from the 51st Pennsylvania Infantry.  Of this regiment’s ten companies, five were recruited in Montgomery County.  It was led by Norristown’s own John F. Hartranft (a future governor of Pennsylvania).  The papers come from the summer of 1865, just after the war ended and the regiment was mustering out in Alexandria, Virginia. 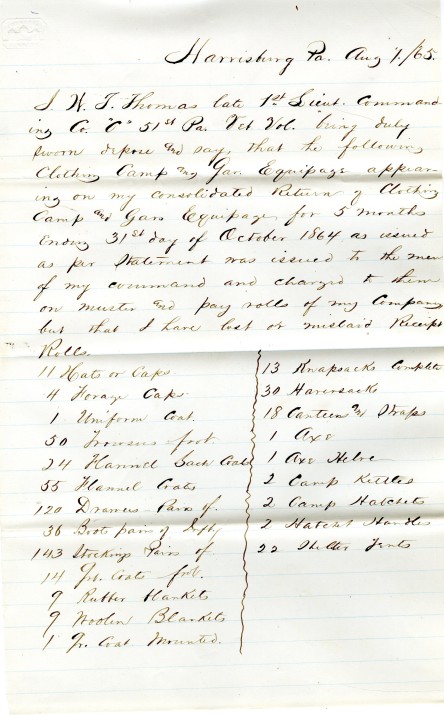 These are two lists of stores showing what Company C received from the Quartermaster, or in one case the “C. C. and G. E.” (if someone knows what that stands for, please let me know in the comments). 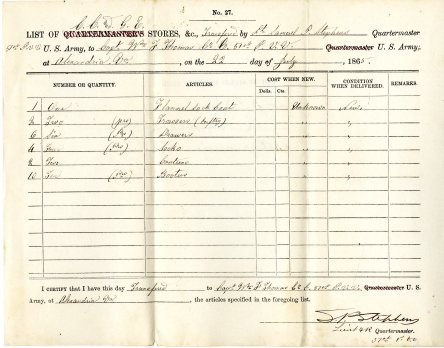 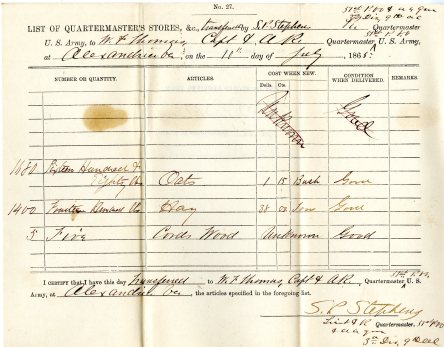 Finally, we have this great document that the men themselves signed or in a couple of cases left their mark.  It lists the items each man received: sack coats, trousers, drawers, socks, bootees, and canteen. 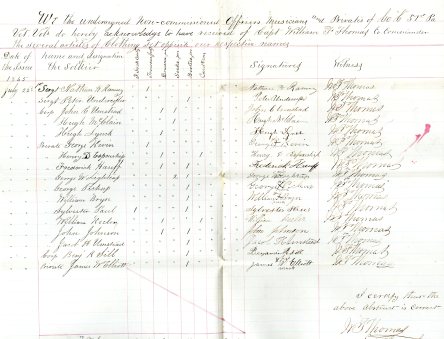 All the papers concern Company C, so most likely the papers were saved by one of the men, perhaps even Captain Thomas himself.  I have yet to find the record of how they came to the Historical Society.

As I work my way through the lower stacks, I find a lot of intriguing things.  This morning, I opened a box that had been donated to the Historical Society in 1972 with instructions to keep sealed until 1978. 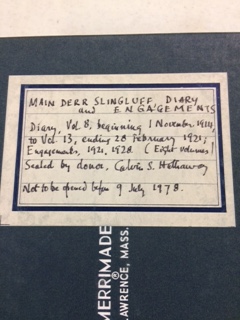 That’s not particularly unusual.  Donors often protect the privacy of their relatives or friends by requesting that personal papers go unopened until sometime after the individual’s death.  The boxes containing Main “Annie” Derr Slingluff’s diaries were probably opened in 1978, as instructed, but they were never cataloged or described. 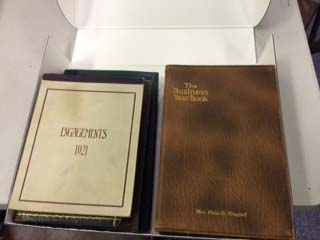 There are twenty-seven volumes in all, from 1908 until her death in 1938.  Main Derr Slingluff was born in Norristown in 1868 to Henry and Ellen Derr.  She married William H. Slingluff (a future president of Montgomery National Bank) in 1892.  Now, I can’t say for sure that this picture is Main D. Slingluff because it is only identified as a member of Slingluff family.  However, it was donated by the same man who donated the diaries, and the style of the clothing is consistent with Mrs. Slingluff’s dates. 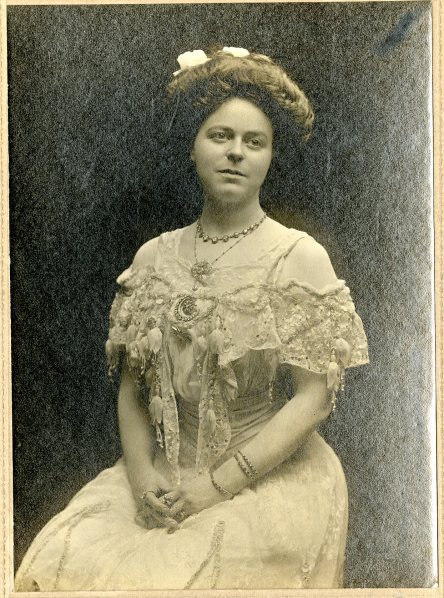 When something has been sealed up, we often expect there to be something scandalous or controversial.  Of course, I wasn’t able to read all twenty-seven volumes of her diaries, but I didn’t see anything of the sort.  I did find some very moving passages from the life of one of Norristown’s society ladies in the early 20th century.

The entries describe trips to the theater and the “movies,” bridge games, her involvement with St. John’s Church in Norristown, and drives in the family car.  The Slingluff’s had two children, Eleanor (born in 1896) and Marjorie (born in 1900), and they feature prominently in the diaries.  In August of 1909, both girls became ill.

Everyday in August, Mrs. Slingluff recounts her day with the children, their symptoms, and the doctors who came to the house.  Then on August 30th, she wrote:

Eleanor recovered would recover from typhoid a few weeks later.

Most of the diaries are personal.  I looked through the years of World War I and saw little reference to it.  Likewise, I looked through October of 1929 and found no reference to the stock market crash.  In 1918, however I found two entries that were interesting.  At the beginning of the year she wrote:

“Grippe” is what we usually call the flu today.  And it’s possible that the the flu that sent Mrs. Slingluff to bed in January of 1918 was just the run of mill flu.  But, January, 1918 was the start of the “Spanish” flu epidemic that killed tens of millions.  She recovered, and in November was able to record this happy entry:

Main D. Slingluff continued to live in Norristown after the death of her husband in 1930 and after her only surviving daughter moved to New York.  She fell ill in the summer of 1938, and the last few entries were written by Eleanor.